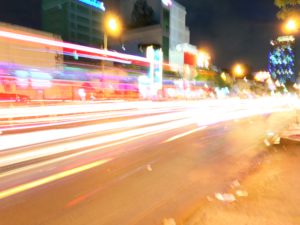 Our arrival in Saigon already tells us a lot about the city. Whether in Hue taxi drivers were fighting to conquer us, here things work differently. The great number of foreigners and tourists do not make them feel the need to fight for get the run. When we ask one of them for the price to get to the city center he tells us 150.000 Dong. Good price, we accept but suddenly his boss come and ask for 250.000 pretending that the ticket for parking the taxi in the airport parking is costing 100.000 Dong. We don’t fall in the trap, these days in Vietnam taught us that it cannot cost more than 20.000 Dong. We deny expecting to start a negotiation but it does not happen: Saigon is the most visited city by tourists and foreigner businessmen, they will find someone else to fool with the price (still very low if compared with western standards).

We get to our hotel and fall into our beds, the Mekong River is waiting for us the morning later.

Mekong river is one of the longest (and most polluted) river in the world, it starts from Cina and goes through 5 countries (Myanmar, Thailand, Laos, Cambodia and Vietnam) before finally get to the South China Sea.

The difference between tourists and what is reserved to them on one side and the local population living in the delta islands is bewildering.

We are taken to a small market where we receive local fruit while sad girls of the place sing songs to us. In the village there is an only big tent used as common dormitory, some sleep on hammocks, others sleep on the ground, other fishermen sleep directly on the river, inside houses made of metal sheets.

Coconuts are offered to tourists, and so also local products and a lunch in a restaurant with green lawn all around and entrance directly from the river.

After lunch we go back to Saigon and we go for a walk around the city. Also in Saigon there is an intense traffic jam and to cross the street requires a certain grade of courage. Motorcycles run everywhere, sidewalks included, and they are also parked everywhere: both at the entrance of shops forbidding to entry and also inside the hall of our hotel.

We go to Bitexco Financial Tower (Financial… who has evert talked about Communism in Vietnam?!). The Skybar is celebrating the Bastille Day and French flags are everywhere (those French flags of the colonialist still hated in the North of the country). The view is very suggestive and still cannot give a complete idea of how big is the city: although we are sipping our cocktail at the 52th floor of the building, the lights go far beyond the horizon we can see from here. 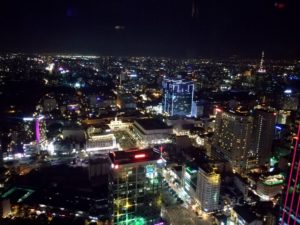 Once back in the streets, our next destination is the night market. Here it is possible to buy shoes, belts, clothes, bags, watch, completely looking like the original brand ones, but for far cheaper prices and negotiable. One can get to buy anything for less than a fifth of the initially declared price.

We stop for having dinner inside the market area,  there is a place where they cook grilled fish. It seems to be very nice and we sit there. But here is that the imponderable happens.

We ask for some rice and a fish (“a”, for they take you a whole one). First come the rice, fish requires a bit longer to arrive. As we are eating the rice, my trip fellow notices that the fire used under the grill to cook fishes is fan by burning plastic bags. 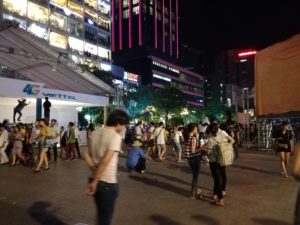 It is so incredible that we don’t believe our eyes, until this practice get repeated other times, in front of everyone with nonchalance. We decide to intervene and we ask the manager for explanation, but he seems not to understand the dangerousness of what is happening.

It is imponderable for us, but it is a clear example of the lack on health, hygiene, and respect of environment education and culture of this beautiful country, as I could already notice from the dirty water in Halong Bay, the out-of-control construction boom and the total absence of a real regulation for vehicles.

After many efforts to make them understand how dangerous was what they were doing, we ask to pay only for the rice, in the consequent argue we get threatened to face Vietnamese police for that involving also an American tourist. We finally get out as winner of the argue, but still hungry, we will have later some street food that will be not much healthier anyway.

We finally get back to our hotel, it has been an intense day. Surprises in this country never end.

From Venice, Italy, but currently in Rayong, Thailand,