A new ’68: France between strikes and occupations 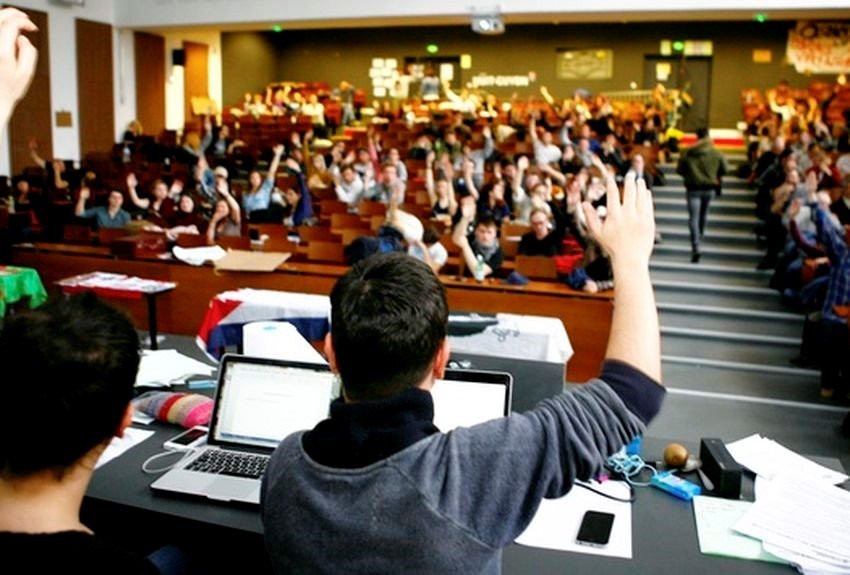 View all posts by Beatrice Cerri

50 years have passed since the May of ’68 but today France is living a student mobilization again. On 15 February, the Vidal law (or so-called ORE law), a law that is aimed to edit the current regulation in matter of right to access to university, has been voted.

The Vidal law move from the fact that one student every two circa is now leaving his course even before the first year ends. The new law would demand high school students to choose for a very defined and constant study path to follow, eventually taking them to choose a type of high school in the consideration of the university program they foresee to attend later. Another feature of the new system is the importance given to high marks at high school as they will be the criteria to prioritize the access to the university. Moreover, the Vidal law voided social welfare for students: according to this law, students social welfare will be directly linked to their parents one, paying the entire contribution for university when applying at the start of the programme unless a scholarship is provided.

As consequence of a general rejection to the Vidal law, there have been several mobilisations until, in February, the Paul Valéry of Montpellier students decided to occupy the site after a conference attended by 3000 people. That is not the only university where this happened, it is estimated that 15 universities on 400 in France have been occupied during these months. In the middle of March, there have been riots as consequence of the occupation of the amphiteatre of the faculty of law by protesters that led to an intervention of a military squad in the night between 22 and 23 March.

Another case happened in the capital and its suburb. Here, the symbol of the uprising is Tolbiac, one of the sites of the university Panthéon Sorbonne of Paris. Occupied by the end of March, it has been cleared only on the 20 April in consequence of an intervention by the police that made 150 people get out of the building. After police action, students moved to the Censier center of Sorbonne Nouvelle – Paris III university that was being occupied since 9 April.

Tolbiac students were not new to the campus, having they attended the general conferences of the previous days and, in many cases, voted. This in particular led to controversies among students: during these conferences, in fact, there was no student card check, hence allowing everyone present to vote no matters who they were, other universities students and labor union representatives being there. Therefore, many claim that the Paris III university has been occupied as consequence of the result of an antidemocratic and rigged electoral system. This would have favoured the vote of external people (that were invited to vote by occupants via social networks) over the vote of the students of the university that were often precluded to vote because of transportation difficulties (some of the public transports were on strike in those days) and could not get to the conference. The movement representatives have been many times reproached for not providing the chance to vote on-line (that would have filtered those with the right to vote thanks to access through credentials) claiming that this would have not guaranteed the privacy of voters.

Another criticism to the movement refers to the choice of blocking the university during the exam session. After first demonstrations in fact, administration and professors had to find alternative solutions for their programs, so to avoid the risk for students to lose the year and, at the same time, not to surrender to the request from occupants to give a “10 increasable”[1] to everyone. Students with particular status (as, for example, Erasmus students) have been given the permission to enter at the university starting from 12th April, the day after the vote, when the occupation became “filtered”.

After 30th April police intervention, occupants decided to keep on with their demonstrations moving from the university to the streets, going on with the project of the “convergences des luttes”(protests convergence) together with other groups of strikers from the labor world, railways workers in particular but also teachers that decided to start a strike after this event.

So far, all universities in Paris have been cleared and opened, except those that remain closed for cleaning and safety reasons and only two universities are still occupied in the whole region. A communication from the ministry claimed that, for the moment, altogether the amount of damages is estimated to overcome 2M €.

[1]In the French system, “10 increasable” is the passing mark with the chance for the student to improve it

Tensions and extremism in Italy, the Macerata wound
A brief summary of Cottarelli’s “Seven Sins of the Italian Economy”