About the love for sculptures

Home /Culture/English/About the love for sculptures 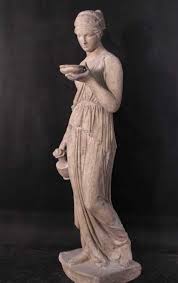 View all posts by Emilia Mikautsch

It was in Rome, I think, when I discovered my love for sculptures.

In Rome during a study trip in my school days.
Before that trip, I was opposed to three-dimensional art.
All my attempts to create a handsome sculpture during art lessons failed miserably and ended in bad-looking clay sausages.
I realized that I would not have become a sculptor.
But in return, it is beautiful to enjoy the work of the big artists.

I saw stunning sculptures in the Villa Borghese.
They are very detailed and sculptured with abandon. You could almost say they are alive. Bernini managed to create tension in his work.
The story plays in the spectator’s mind and comes together with the climax, which is represented by the statue. When you look at “The Rape of Proserpina” you can nearly hear Proserpina screaming.
Exactly this charm, that makes the viewer’s mind imagine the rest of the story, is what I love about art.
Proserpina’s despair is shown in an excellent way by her suffering facial expression and her open mouth. In this masterpiece marble becomes flesh: at the point where Hades grabs her leg to hold her so he can take her to the underworld [1], the marble seems soft and smooth as if it was made of flesh and blood and you wish you could touch their bodies to ascertain if your eyes were fooled and if it’s really made of stone.

I could look at these statues for eternity and would not get enough of them.

Admittedly, I favour sculptures over paintings. Why?
Some important aspects are, that many statues have several points to look at them and not only one front side and in addition to that, I would underline the desire of touching sculptures because of their realistic and lifelike appearance.
By the way, I talk mostly about sculptures from the renaissance and baroque.

I also followed my passion for statues in the museums of Brussels.
At this point I must praise the disposal of the sculptures in the premises.
I take the stairs to the next floor further down and see a naked woman with a crown spitting at me while she seems to sit on a two-headed lion.
Unfortunately, I did not write down the name of the artist or the title of the sculpture.
But the most interesting thing is: the effect is only completely existing if you look at it at an angle from above. I go downstairs to stand in front of it and I notice that the tension is gone. The real effect was only created in that moment looking at the statue, when I came downstairs and felt the full force of the woman’s emotions.

In another room, I ran into one of “the Burghers of Calais” by Rodin.

This statue deserves its place. It’s not that detailed like the marble sculptures of Bernini but here the expression and presentation are the centre of attention.
With a stern face “the man with the key” is looking at me and at the same time he casts two huge shadows on the floor. I have a feeling of coldness.
I wait a moment, look at him reverentially and continue my visit in the museum with a restless feeling.

After having finished my visit I move on with my trip through Brussels and pass the European Parliament.
In front of its doors stands another statue: “Europa”.
A woman looking forward holding the Euro symbol in her right hand.
In my opinion she is not convincing with fineness or dynamism.
Nevertheless, I think she shows power.
Frankly, she looks static to me and is depicted from the front.
But one thing is obvious: She represents pride.
The pride, to be the symbol for a common Europe and currency.
She does not stand for an individual, but for the European community, for you and me.

According to May Claerhout, the Belgian artist behind “Europa”, the statue is a woman who refers to the ancient myth about Europe.
The statue is carried by a spiral made of women and men who become a dynamic mass. The woman holds the European “E” in her right hand which is the symbol of the Euro but also the connection between all European people and nations. [2]

I am impressed by the diversity of materials and styles of these statues.
While I was not allowed to touch the works of the great masters and had to keep a distance to them in the museum, it is the opposite case with Claerhout’s statue.
I recommend to you to take enough time to look at the works calmly and, if possible, to go around the statues and try to find out which story it is telling and to observe and enjoy even the smallest details.
What does it express? Which moment is shown?
Because the most beautiful thing in art is when the story continues in the spectator’s mind.