A dead-end road for Catalonia 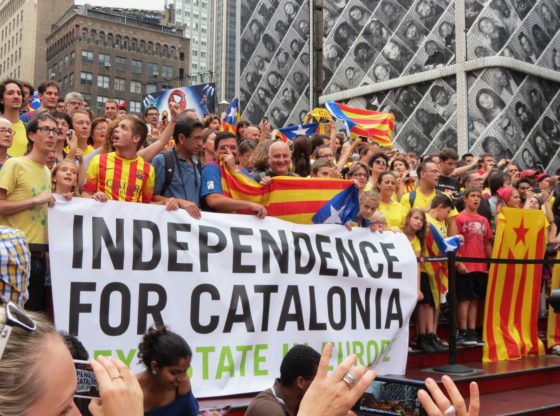 Since 2012 every 11th September mass protests in favour of the independence take place in Barcelona coinciding with the celebration of the national day of Catalonia, in which the defeat of Barcelona by the Bourbon troops during the Succession war that signified the elimination of the autonomy of Catalonia is commemorated.

That day, the 11th September 2012, became an inflection point for the sovereignty movement in Catalonia. After that moment the current Catalan government understood that a great part of its electorate was supporting the independence, so the main catalanist political parties (the ones that are focused on the regional and local politics and do not run for national elections) began to opt fort the objective of turning Catalonia into the next European nation. The obtaining of an absolute majority in the autonomic elections in October of 2015 became the starting point of what is called as the sovereignty process, which will end the next 1st October with the celebration of an independence referendum.

Catalonia is a region with a strong national identity that counts with an own language and culture. During different periods of the last three centuries, specially during Franco’s dictatorship, there were attempts of reducing the Catalan language and culture to a minimal expression in the interest of a homogenization inside the Spanish national identity. However the result of that effort is the fact that the Catalans have become very conscious on the defense of their own heritage, valorizing it and keeping it alive. Even a significant part of the Catalan people feels unwilling to recognize themselves as Spanish.

It’s very important to know the demographic composition of Catalonia. With a population of more than 7 million people, more than 4 of whom live in Barcelona and it’s metropolitan area, the migratory waves have strongly influenced the composition of today’s Catalan society. Between the 50’s and the 70’s Catalonia received a huge quantity of immigrants coming mostly from less developed areas of the southern Spain that were established mainly in the industrial towns around Barcelona and the coastal area. It has been estimated that without such an important demographical growing the present population of Catalonia would be of a few more than 3 million people.

Considering the demographical composition we can identify two well differentiated areas in Catalonia: On one side an inland Catalonia where the most part of the people belong to native families, and on the other a metropolitan Catalonia, with a bigger density of population and a where a large part of whose inhabitants descend from Andalusian, Extremaduran, Murcian or Castilian people.

In the inland Catalonia there’s a rooted Catalanist feeling. It’s a territory where the Catalan is the mother and the main used language by the most part of the locals, and where the parties that have taken a stance for the independentism in the last years are strongly supported. The reality is different and more complex in the metropolitan Catalonia, a place where the Spanish is the mother language of a big part of the population and where this Catalanist feeling has not been transmitted to those who are grown in families with a foreign origin. Here there is a mixture between people who sympathise the sovereignty movement, people who are against it, and many others that don’t matter at all.

The most part of the Spanish society, and specially the main political forces, don’t agree with the wish of an important part of the Catalans of separating from the rest of Spain. That’s why, sheltering on the constitution, that affirms that the Spanish nation’s unity is indivisible, the state and the courts have prohibited the celebration of a referendum concerning something that goes against the law. However the politicians that order the Catalan parliament and lead the sovereignty process seem to be decided to follow their roadmap until the last consequences, even if they know that they are acting against the Spanish legality.

The opposition of the central government supposes a big trouble for the celebration of this democratic exercise. Considering that it would be an illegal voting, during the last weeks the organizers finding a big amount of obstacles. Those organizers risk of being accused of earmarking public funds to finance an illegal act. It’s not sure if they will count with all the necessary means (ballots, ballot boxes…). Some mayors belonging to parties against the referendum have announced that they won’t assign public use establishments to it’s celebrations, and it’s also expected that not all the functionaries and policemen that will be convened will be disposed to participate in this event.

It remains to be seen if, supposing the case that the referendum will be celebrated, those citizens that do not support the parties leading the sovereignty process will go to the ballot boxes considering that it would be a voting without any guarantee and neither validity according to the Spanish legislation. At the moment the pro-referendum parties, “Junts pel Sí” coalition and CUP, have begin mobilization in favour of the independence and of the referendum itself, but the opponent ones are not developing any campaign, and it’s neither expected as they are against the celebration of this referendum. Under these conditions the celebration of the referendum seems very difficult, but adding the fact that in any case it’s results would be recognized by the Spanish institutions, it’s international recognition seems very complicated.

What seems a beforehand lost battle can be explained as a challenge with the aim of responding the stagnation and the constant negation of all the Catalan pretensions as the attitude of the Spanish institutions. The cut of the Statute, which regulates the autonomy of Catalonia, and the negation of a fiscal compact, an economical agreement similar to those that are applied in the Basque Country and Navarre, explain a big rise of the independentism during the last decade. Even if this positioning was a minority until the last years, nowadays the parties for the independence count with the support of practically the part half of the Catalan electorate.

The possibility of celebrating a referendum about it’s independence, as the Scotland and Quebec already did, seems impossible at the moment. Without a reformation of the Spanish constitution, the celebration of a binding referendum to vote for or against the independence of a Spanish territory will be never legal. In addition the main political forces are not disposed to reform the constitution, specially any any article concerning the unity of the nation. At this point we find ourselves in a dead-end road without any possible alternative for the independentism pretensions, so the leaders of the Catalan sovereignty process have board in a journey that will take them beyond the legality and seems condemned to a failure. Nevertheless the promoters of the referendum show themselves extremely confident, affirming that in a scenario of yes to independence reaching a majority on the voting, Catalonia would break away from Spain unilaterally.

Definitely the Catalan question is a conflict on which Partido Popular, the Spanish government’s party, will invest all it’s efforts as it will try to show an image of a reliable party and the only one in which the Spanish citizens can rely to knock out the independentist’s aspirations trough it. On the other side the catalanist parties, specially the recently refunded Convergència Democràtica de Catalonia, are not afraid to begin this sovereignty process in order to attract potential independentists, whether traditional catalanists or discontented citizens because of the poor running of the Spanish institutions, with the aim of following to have a main role on Catalan politics. While this issue has become almost the only political topic on the Spanish media, the several corruption plots which affect both sides and the problems of daily concern for the most part of the population are now in the background.