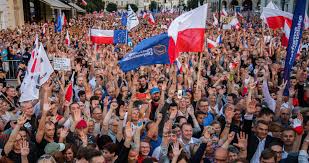 View all posts by Marcin Bak

Half of July 2017. The ruling party in Poland, called the Law and Justice (PiS), despite the near end of the session and the start of summer break for the parliament, changes the plan of the session and pushes a controversial bill on the agenda. A bill to change the way of choosing the judges so that they are chosen by the party. What they do not expect though, is that this time the Youth will join the other age-groups in the anti-government protests.

The Youth dissatisfied with the opposition parties Civic Platform (PO) and Modern Party (Nowoczesna) did not care much for the protests before. The opposition could not find a way to appeal to younger voters, partially because of the old faces in the leadership. However, this time the protests were not gathered by the parties but were spontaneously organised by the citizens.

One week later, on 24th of July. The President, who belongs to the same party vetoes the bills. The Law and Justice party is paralysed and the country is shocked by that act, without any doubt inspired by people on the streets. But how did all of this happen in just a week?

The answer is not that simple: just when the debate started in the parliament the people went on the streets and this only escalated the conflict in the parliament. The ruling party members have never been so angry before and maybe those scenes as viewed from various live-streams inspired the youth to act. The protests started to spread not only in big cities, but also in small towns. In some of them the protests started with just 2 or 3 people standing with candle lights by the local courts and grew to hundreds of people, meanwhile in the big cities, they grew to hundreds of thousands. Some people even stopped their vacation by the polish sea to go to president’s summer residence and protest there.

The protests then spread abroad. Poles with a second citizenship started writing to their PMs in different countries to help the polish opposition. The protests then started by the embassies and consulates. And those were not only the Poles protesting: there were also Czech, Italians, Germans, Romanians, Irish, Spanish and on and on. To summarise, our European brothers helped us in our struggle. This especially affected the polish population because of our historical struggle’s motto “For freedom yours and ours”. Because of it, throughout the history we fought alongside other countries for their independence. Since I was abroad during this crisis, I could not help my countrymen at home and I went to one of those protests by the polish consulate in Munich. I was very touched by the fact that so many people who are not from Poland came to protest with us because, as they said, “We are all Europeans”. 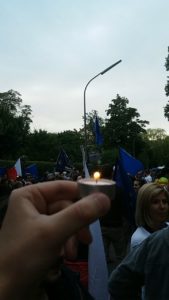 This made me think about the future of my country: I think that Law and Justice party has done one good thing to the world. Never before was the opposition so pro-European. Never before were the young people so tied to European values. This fight for democracy has shown them how much those European values mean to them, and maybe if we had to go through this episode, it is good that it is happening now. Polish economy is growing fast and soon we will be a very important country in the European Economic network. According to some measurements, our GDP is already higher than that of Argentina, which means that in the coming years we may secure a place in G20 and have an important voice in the world affairs. So be prepared world: because when we change the government, this new Poland will repay you for your help and will be an important representative of liberal and European values in the world.

How to make the world a better place
Defining a concept: populism